Always on the offbeat

I’m a wordsmith, musician and community workshop leader currently based in the Midlands. I work with several charities, organisations and causes delivering music and arts sessions with the intention of supporting communities whilst connecting people to inspiration, each other and themselves. Bursting with ideas ready to venture into new realms and multi-disciplinary projects, I’m a lateral and quick-thinking creative keen to work directly with people to release their creativity and realise artistic visions.

Proud winner of Creative Voice Award 2020 from The Mighty Creatives as “an outstanding creative ambassador making an impact in championing and promoting creativity in the region”.

Poet by surprise who happened upon installation art, stumbled down a multitude of musical stairs and landed with a graphic design degree, I have an obsession with absurd wordplay, funky rhythms and finding the unusual in the everyday. I have been described as “fizzy”, “walking warmth” and my poetry as “falling down alphabet stairs”. When I studied at an art school in France, my illustration teacher said to me

which means “you think on the other foot”. You’ll find me riddled with pareidolia (finding faces in things), listening intently to silence, searching for new sounds or concocting voices, characters and situations. 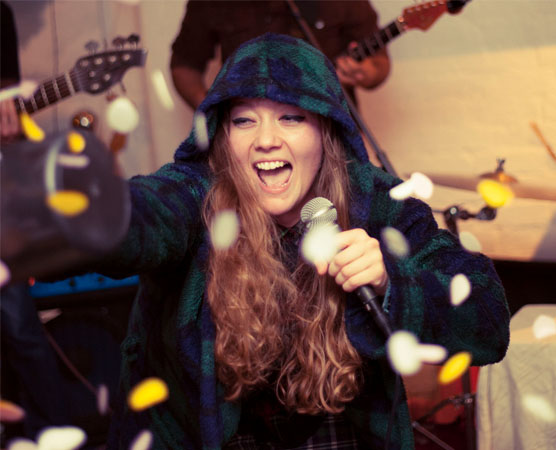 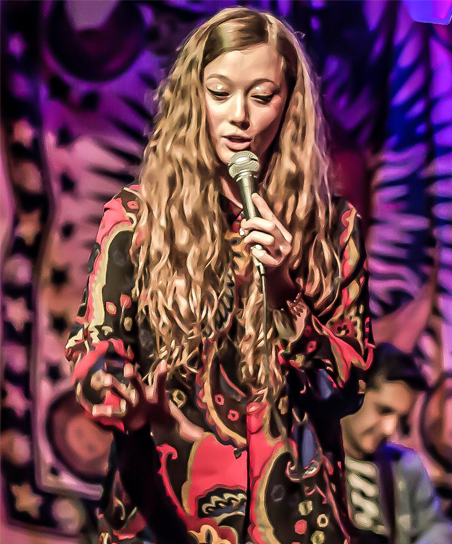 I grew up involved in musical theatre, although shy I slowly emerged from my quiet shell. After having no idea which direction to go in from secondary school, I pursued an art foundation at college and upon completion realised I had no idea which direction to go in. I visited De Montfort University (after they’d spammed my doormat) with the idea of picking the most random course on the menu. Footwear Design, though intriguing and technical, led me to realise my future was not in fashion and I stumbled across a friend’s sketchbook in Graphic Design & Illustration and switched to this course post haste. During the summer just before it started, I spent the holiday living alone exploring deep meditation and reflection when suddenly something in my brain unlocked and a flurry of word-flow flooded out.

Up until this time, I was sure I hated poetry so I’m sure you can imagine this was an immense surprise to realise that I am a poet.

During first year, I got it in my head I couldn’t do illustration and dropped it, took an ERASMUS year after second year to study at ESAD (an art school) in Orléans, France, fell in love with illustration, explored a multitude of realms of creativity including typography, editorial, service design and printmaking, came back to complete my third year in BA (Hons) Graphic Design. As part of my final project, I picked up ideas, from that momentous summer where I became a poet, for an interactive poetry exhibition called House of Verse. After staging the first one, feedback led me to realise people loved the live aspect as well as the installation art pieces. With support from the Crucible project at DMU Innovation Centre, I was able to work on House of Verse as a business. House of Verse since snowballed and I ran it for 5 years as a creative events business staging heaps of shows and projects in venues and festivals across the UK. In the middle somewhere, I started delivering workshops in myriad fields including music, lyric writing, arts/crafts, career development, business and more. Networking throughout Leicestershire gained me countless contacts in many awesome charities and organisations across the Midlands who I am honoured to have worked/currently work with. Cycling full circle, I revisited my passion for installation art and co-worked on some wonderful installation art projects including Lace Piano and Silent Orchestra. Currently working with care home residents, secondary and primary school students, I’m one of two Evolution Community Music Leader Trainees with Evolve Music Charity and in the audition process for studying a Masters in Music Therapy at UWE.